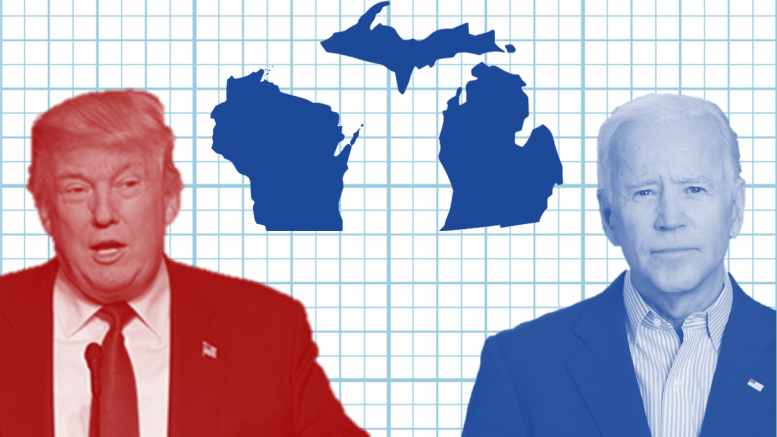 Loudonville, NY. President Donald Trump carried Michigan in 2016 by three-tenths of a percentage point and he now trails former Vice President Joe Biden by eight points, 48-40 percent, with four weeks until election day. In Wisconsin, Biden has extended the five-point lead he held in September to now 10 points, 51-41 percent, according to The New York Times/Siena College polls of likely Michigan and Wisconsin voters released today.

“In 2016, Michigan voters, supported Trump by fewer than 11,000 votes out of nearly five million cast, making him the first Republican presidential candidate to win it since 1988. This year, Michiganders appear to be heading in the opposite direction. Biden has a 17-point lead among independent voters and is doing a better job holding on to Democrats than Trump is holding Republicans,” said Don Levy, Director of the Siena College Research Institute. “While Trump has a slight two-point edge with men, Biden has a solid 17-point lead with women, and he also has a 13-point lead with voters 65 and older.”

“Trump and Biden are running even among white voters, but Biden has a commanding 86-12 percent lead with Black voters,” Levy said. “Only eight percent of voters say that they may still change their minds, while 92 percent say they’re locked into their choice, narrowing the number of persuadable voters.”

“Overall, voters have comparable views of the vice presidential candidates, although independents view Harris favorably and Pence unfavorably,” Levy said. “And while Trump is four points under water on his favorability rating, Biden is 12 points positive.

“As Republicans seek to hold control of the United States Senate, they appear to have a new target in Peters. With a month to go, James is virtually even with Peters, even as Biden holds a significant lead over Trump. James leads by six points with men and Peters leads by eight points with women,” Levy said.

“Biden continues to maintain two-to-one leads with both non-white voters and whites with a college degree, and he’s cut into Trump’s lead with whites without a college degree and now Biden only trails by six points with those voters, down from 11 points,” Levy said. “In the Milwaukee suburbs, a previous five-point lead has been flipped and now Biden leads there, 46-41 percent.”

“Voters do not trust the Trump Administration is providing accurate information about the President’s health by 56-40 percent. Distrust is near unanimous among Democrats and at 62 percent with independents, however, Republicans do trust they’re getting accurate information 86-12 percent,” Levy said. “By a larger 62-30 percent, voters – other than Republicans – say that Trump’s contraction of coronavirus was a result of his not taking adequate precautions.

“While by a small 44-39 percent plurality, Wisconsin voters support Barrett’s nomination as a Supreme Court Justice, they are nearly evenly divided on whether the Senate should vote on her nomination before election day, or only if Trump wins re-election,” Levy said.

Game On: Faso 43 Percent, Teachout 42 Percent ¾ of Dems with Teachout, ¾ of Reps with Faso; Inds Divided