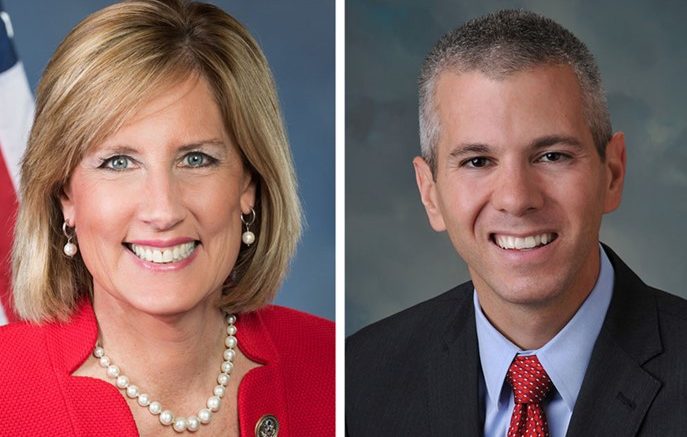 Loudonville, NY. Freshman Democratic incumbent Anthony Brindisi holds a nine-point, 48-39 percent, lead over former Republican Representative Claudia Tenney, according to a new Siena College/Syracuse.com poll of likely 22nd C.D. voters released today. Brindisi has 51-35 percent favorability rating, up from 47-41 percent in the November 4, 2018 Siena poll just prior to that election. Tenney has a negative 37-52 percent favorability rating, down from 48-45 percent in the days leading up to the 2018 election.

Former Vice President Joe Biden and President Donald Trump are running almost dead even, with Biden holding a single-point edge, 45-44 percent. In 2016, Trump carried this district by 15 points, and Tenney won by five points in a three-way House race.

“Brindisi and Tenney are engaged in a rematch of 2018, which Brindisi won narrowly, 51-49 percent, in a district with one of the largest Republican enrollment advantages of any congressional district in the state. A month before the 2020 election, Brindisi holds a significant lead,” said Siena College pollster Steven Greenberg. “Brindisi has support from 80 percent of Democrats, leads by 14 points with independents and even picks up support from more than one-quarter of Republicans.

“While Tenney is keeping the race tight in Oneida County – it was tight there two years ago – Brindisi leads by 19 points in Broome County and 13 points in the remainder of the district,” Greenberg said. “Brindisi enjoys a 21-point lead with women and men are nearly evenly divided between the two. Voters without a college degree are evenly divided, while those with a degree support Brindisi by 21 points.”

“In a district that Trump carried by 15 points four years ago, Biden and Trump are running neck and neck.
Not surprisingly, Biden leads among Democrats 85-10. However, Trump only leads among Republicans
73-19 percent. And independents give a narrow 42-39 percent edge to Biden,” Greenberg said. “What was safe Trump Country four years ago is now a battleground district for president, even as Tenney tries to cut into Brindisi’s lead and turn the race for Congress around.”

“Two-thirds of NY22 voters plan to vote in person on election day, and another 11 percent plan to vote in person by early voting. Currently, 12 percent plan to vote by mail and nine percent are undecided on how they will vote,” Greenberg said. “A majority of voters, 51-34 percent, say the country is headed in the wrong direction, not on the right track. Three-quarters of Democrats feel that way, as do a majority of independents. Republicans say the country is on the right track 52-31 percent.”

This Siena College/Syracuse.com 22nd C.D. survey was conducted September 27-October 4, 2020 among 383 likely 22nd C.D. voters. This poll has a margin of error of +/- 5.0 percentage points. Calls were made to a stratified weighted sample of voters from the L-2 Voter list via both land and cell phones. A likely-to-vote probability was computed for each respondent based on their stated likelihood to vote as well as by virtue of the imputation of a turnout probability score based on past voting behavior. This combined probability to vote score was applied as a weight along with a weight that considered party registration, age, region, and gender. Polling support for this project provided by Institute for Policy and Opinion Research at Roanoke College. The Siena College Research Institute, directed by Donald Levy, Ph.D., conducts political, economic, social, and cultural research primarily in NYS. SCRI, an independent, non-partisan research institute, subscribes to the American Association of Public Opinion Research Code of Professional Ethics and Practices. For more information, please call Steven Greenberg at 518-469-9858. Survey cross-tabulations and frequencies can be found at: www.Siena.edu/SCRI/SNY.

Owens Has 5-Point Lead over Doheny – Even with Hoffman Out

Voters Like Paterson Proposals; Still Do Not Support his Election

Strong Consumer Sentiment Up 2 Points in New York, Down 3 Nationally