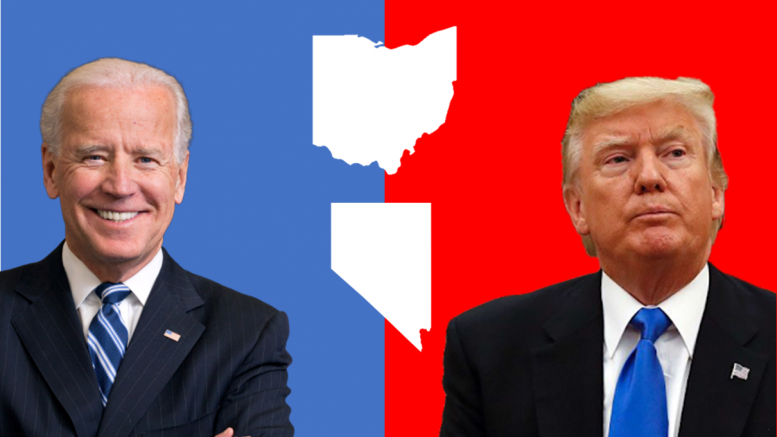 Loudonville, NY. Ohio, which has been on the winning side of the Electoral College vote in every presidential election since Lyndon Johnson in 1964, has a near dead even race this year with former Vice President Joe Biden supported by 45 percent and President Donald Trump supported by 44 percent. In Nevada, Biden has a six-point lead, 48-42 percent, little changed from 46-42 percent last month, according to The New York Times/Siena College polls of likely Ohio and Nevada voters released today.

“Ohio, which prides itself on picking the winner in presidential races is undecided with less than four weeks until election day. With just one point separating Trump and Biden overall, men side with Trump by 10 points and women side with Biden by 11 points,” said Don Levy, Director of the Siena College Research Institute. “Biden does slightly better holding Democrats than Trump does with Republicans, and independents are leaning toward Biden, 42-38 percent.”

“Trump leads among white voters by seven points and Biden has a commanding 67-20 percent lead with non-whites,” Levy said. “We see here, as in many other battleground states, the split between white voters with and without a college degree. Those with a degree support Biden 55-37 percent and those without a degree support Trump 55-35 percent.”

“Among the four national candidates, only Pence has a positive favorability rating with the other three all break-even,” Levy said. “Ohioans say they trust Biden more than Trump on the pandemic by seven points, on unifying America by 10 points and on protecting people with pre-existing conditions by 10 points. Trump is trusted more on the economy by 14 points and voters are divided between the two on maintaining law and order, or on picking a new Supreme Court Justice.

“By a 58-32 percent margin, voters say the President’s lack of taking adequate precautions is to blame for his recent coronavirus diagnosis. Only Republicans, by a 60-27 percent margin, think Trump did take adequate precautions against getting COVID-19. Even a majority of whites without a college degree say Trump did not take adequate precautions,” Levy said. “When it comes to large in-person rallies in the closing days of the campaign, nearly two-thirds say no, and that campaigns events should be small and socially distanced. Even a plurality of Republicans is opposed to large crowd events.”

“Nevada voters haven’t changed very much over the last four weeks. A four-point Biden lead in mid-September is now a six-point lead, with Biden inching closer to the ‘magic 50’ percent mark,” Levy said. “Both candidates continue to do a great job of holding onto voters of their party, and independent voters continue to lean toward Biden by five points.”

“Biden continues to hold a large lead with women, 14 points, down slightly from 16 points last month, while men are closely divided, leaning toward Trump by three points, down from seven points,” Levy said. “Trump continues to have a large lead among white voters without a college degree, while Biden still leads by double digits with college educated whites, and by more than 30 points with non-whites.”

“By at least 10-point margins, Nevadans trust Biden more than Trump on the pandemic, unifying the country, and protecting pre-existing conditions. They also trust Biden more on choosing a Supreme Court Justice but by only six points,” Levy said. “Trump has a narrow four-point edge on the economy.

“By nearly two-to-one, voters say the President contracted coronavirus because he didn’t take adequate precautions. Republicans are the only demographic or political group that thinks he did take adequate precautions,” Levy said. “Republicans also stand alone in thinking that large crowd campaign events are preferred. Overall, by two-to-one, voters think small socially distanced campaign events are the way to go. Even whites without a degree say small events are better by an 18-point margin.”

Be the first to comment on "The New York Times / Siena College Battleground Polls: Ohio and Nevada"