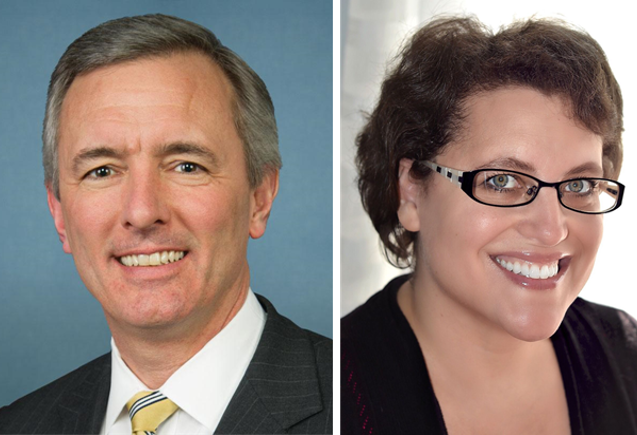 Loudonville, NY. Republican Representative John Katko continues to maintain a double-digit lead over his Democrat challenger, Dana Balter. Katko leads Balter 53-39 percent, virtually unchanged from a 54-39 percent lead in August, according to a new Syracuse.com/Spectrum News/Siena College poll of likely 24th C.D. voters released today. Katko has a 48-39 percent favorability rating, down from 53-36 in August, compared to a negative 32-42 percent favorability rating, down from 32-23 percent in August.

“Not a lot has changed in this race over the last two months. Katko has a solid 14-point lead, continues to do better with Republicans than Balter does with Democrats, picks up the support of one in five Democrats, and has a 13-point lead with independent voters, ” said Siena College pollster Steven Greenberg. “Balter has extended her lead in Syracuse and narrowed her still-wide gap in Cayuga/Oswego/Wayne Counties, however, Katko increased his lead in the rest of Onondaga County.

“There remains a wide gender gap with Katko leading among men by better than two-to-one, while Balter is running slightly ahead with women,” Greenberg said. “Similarly, Katko has a two-to-one lead with voters who have less than a bachelor’s degree, while they run dead even among voters with at least a bachelor’s degree.

“The most dramatic change in the last two months is Balter’s falling favorability rating, as now a plurality of voters – including a plurality of independents – views Balter unfavorably,” Greenberg said.

“In this district with comparable numbers of Democrats and Republicans – although Republicans historically outvote Democrats in midterm elections – voters are closely divided on which party they want to control the House, favoring Republicans by five points. And voters are evenly divided on President Trump, who has a 48-48 percent job approval rating,” Greenberg said.

“In the closing ten days of the campaign, Balter has her work cut out for her. She needs to find a way to woo back Democrats and attract independents and then has to find a way to turn out Democrats in larger numbers than they usually vote in midterm elections,” Greenberg said. “Katko defied recent history two years ago by winning in a presidential election year, after a decade of Democrats winning in presidential years and Republicans winning in midterm years. He has won each of his two races with 60 percent of the vote. Both candidates have a chance to make their closing arguments but Balter faces the bigger challenge.”

This Syracuse.com/Spectrum News/Siena College 24th C.D. survey was conducted October 18-22, 2018 by telephone calls in English to 500 likely 24th C.D. voters. This poll has a margin of error of +/- 4.6 percentage points. Calls were made to a stratified weighted sample of voters from the L-2 Voter list via both land and cell phones. A likely-to-vote probability was computed for each respondent based on their stated likelihood to vote as well as by virtue of the imputation of a turnout probability score based on past voting behavior. This combined probability to vote score was applied as a weight along with a weight that considered party registration, age, region, and gender. The Siena College Research Institute, directed by Donald Levy, Ph.D., conducts political, economic, social and cultural research primarily in NYS. SCRI, an independent, non-partisan research institute, subscribes to the American Association of Public Opinion Research Code of Professional Ethics and Practices. For more information, please call Steven Greenberg at 518-469-9858. Survey cross-tabulations and frequencies can be found at: www.Siena.edu/SCRI/SNY.

Not So ‘Blue’: McCain Closing Gap vs. Clinton & Obama