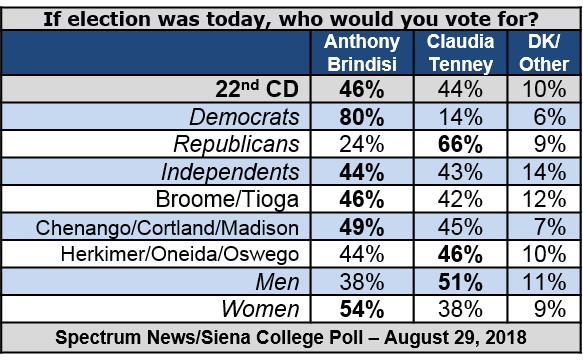 “In a district with 30,000 more Republicans than Democrats, incumbent Republican Tenney is barely holding her own versus Democratic challenger Brindisi, who leads 46-44 percent,” said Siena College pollster Steven Greenberg. “Brindisi is supported by 24 percent of Republicans, holding Tenney to 66 percent Republican support, while Brindisi is supported by 80 percent of Democrats. Independents are virtually evenly divided. Neither candidate leads by more than four points in any region of this sprawling district. Tenney leads with men by 13 points and Brindisi leads with women by 16 points.

“Tenney is more well known, however, nearly half of voters, including three-quarters of Democrats, view her unfavorably,” Greenberg said. “Though unknown to more than a quarter of the electorate, Brindisi has a strong favorability rating from Democrats and independents and is only under water by six points with Republicans.

“By a 13-point margin, voters want Republicans to control the House after the election. Voters approve of the job Donald Trump is doing as President 51-44 percent,” Greenberg said. “Will Brindisi continue to garner significant Republican support or will Tenney be able to woo them home to her? Which way will independents tilt or will they continue to be evenly divided? With huge outside money being spent on this race by both parties – and constant negative ads on both sides – there’s no doubt this will be a barnburner till the end.”
# # #

This Spectrum News/Siena College 22nd C.D. survey was conducted August 20-26, 2018 by telephone calls in English to 499 likely 22nd C.D. voters. This poll has a margin of error of +/- 4.8 percentage points. Calls were made to a stratified weighted sample of voters from the L-2 Voter list via both land and cell phones. A likely-to-vote probability was computed for each respondent based on their stated likelihood to vote as well as by virtue of the imputation of a turnout probability score based on past voting behavior. This combined probability to vote score was applied as a weight along with a weight that considered party registration, age, region, and gender. The Siena College Research Institute, directed by Donald Levy, Ph.D., conducts political, economic, social and cultural research primarily in NYS. SCRI, an independent, non-partisan research institute, subscribes to the American Association of Public Opinion Research Code of Professional Ethics and Practices. For more information, please call Steven Greenberg at 518-469-9858. Survey cross-tabulations and frequencies can be found at: www.Siena.edu/SCRI/SNY.

Not So ‘Blue’: McCain Closing Gap vs. Clinton & Obama