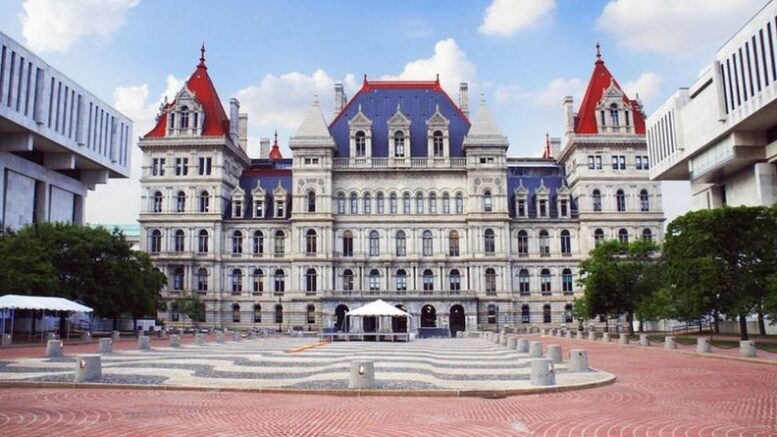 Voters oppose the recent Supreme Court decision to overrun Roe v. Wade and eliminate the constitutional right to abortion, 68-25%. By a larger 74-21% margin, voters say abortion should be always or mostly legal, as opposed to always or mostly illegal. Voters support a new law expanding eligibility requirements for obtaining a permit to carry a concealed weapon – including background checks with character references and safety training – 82-15%.

“Less than 100 days until election day, Hochul has a solid 14-point lead over Zeldin, a reflection of the Democrats’ large enrollment advantage in New York. Hochul and Zeldin are both holding their parties, as she leads among Democrats 81-12% and he leads among Republicans 84-12%. Independents narrowly tilt toward Zeldin, 44-42%,” said Siena College pollster Steven Greenberg.

“Hochul dominates in New York City, leading by nearly 50 points, while Zeldin has slim three-point leads both upstate and in the downstate suburbs,” Greenberg said. “The gender gap is wide, as men are evenly divided, and women favor Hochul 59-33%. While white and Latino voters favor Hochul by six and eight points, respectively, Black voters support Hochul 78-8%.”

Hochul has a 46-41% favorability rating this month among likely voters, compared to 46-37% in June among registered voters. Hochul has a 52-41% job approval rating, the first time Siena has asked Hochul’s ‘job approval,’ replacing the previous ‘job performance’ question. Zeldin now has a 31-28% favorability rating, with 41% either having no opinion or never heard of him, up from 21-22-57% in June.

“Hochul continues to be more well known and liked than Zeldin, although she has not been able to raise her favorability rating over 46%. It has been between 42% and 46% every month since September, her second month as governor,” Greenberg said. “Zeldin’s name recognition certainly got a boost from his primary victory and for now both being the focus of Republican energy and the target of Democrats.

“Fourteen weeks is a long time in politics, and we know most voters don’t really begin to focus on elections till after Labor Day. Still, Hochul has an early – but certainly not insurmountable – lead. In fact, while Democrats have taken the last four gubernatorial elections, Zeldin’s current 14-point deficit matches the closest Republicans have come in those races, when Andrew Cuomo defeated Rob Astorino 54-40% in 2014. In August 2014, Cuomo led Astorino by 32 points, 58-26%,” Greenberg said.

Schumer & DiNapoli Each Lead by 21 Points; James Up by 14 Points

“Schumer leads by 77 points with Democrats, while Pinion leads among Republicans by 63 points. Independents are virtually evenly divided,” Greenberg said. “Schumer leads by seven points in the downstate suburbs and five points upstate, outperforming fellow Democrat Hochul, who trails in both those regions by three points.”

“DiNapoli has been Comptroller for 15 years, winning the office three times, despite being largely unknown to most voters. Just a month before election day in 2018, 52% of voters didn’t know enough about him to have an opinion – yet he still led the field with more than four million votes, winning 67-31%,” Greenberg said.

“The race for AG, like the gubernatorial race, is closer than either the Senate or Comptroller races, largely because of independents, downstate suburbanites, and Latinos,” Greenberg said. “While James leads by 65 points with Democrats, Henry leads with Republicans by 58 points and has a 12-point lead with independents.”

“Although downstate suburban voters lean toward Schumer and DiNapoli by several points, they favor Henry by eight points,” Greenberg said. “It’s worth noting that Latino voters are solidly in Schumer’s camp, favor Hochul by eight points and tilt toward DiNapoli by two points, however, they give an edge to Henry, 44-36%.”

“No surprise in the generic congressional ballot, as 85% of Democrats want their party to maintain control of the House next year and 85% of Republicans want their party to retake control. Independents are closely divided and tilt Republican by two points. New York City is true blue, by 52 points, while the rest of the state is evenly divided,” Greenberg said. “As in all of the statewide races, there is a gender gap here as well, with men being closely divided and women supporting Democratic control by 28 points.”

“Prior to the Supreme Court decision in Dobbs, New Yorkers said they wanted the Court to uphold Roe 60-24%. Today, 68% say they oppose the decision to overturn Roe, eliminating the constitutional right to abortion,” Greenberg said. “Although a small majority of Republicans support the Dobbs decision, it is opposed by 89% of Democrats, 60% of independents, and at least of 62% of voters from every region, age group, gender, and race.

“Even stronger, is likely voters’ view that abortion should be always or mostly legal. That view is held by 88% of Democrats, 75% of independents and 50% of Republicans, as well as at least two-thirds of voters from every region, age group, gender, race, and religion,” Greenberg said.

“Support for the new law expanding eligibility requirements to obtain a permit to carry a concealed weapon – background checks with character references and firearms safety training courses – is through the roof with all demographic groups. In fact, the ‘lowest’ support is with conservatives, who favor the new law 71-27%,” Greenberg said. “There is also strong support for prohibiting concealed weapons in sensitive locations, 60-34%, and requiring private businesses to have a sign if they allow concealed weapons on their premises, 63-32%.”

This Siena College Poll was conducted July 24-28, 2022, among 806 likely New York State voters, with a margin of error of +/- 3.5 percentage points including the design effects resulting from weighting. Calls were made to a stratified weighted sample of voters from the L-2 Voter list via both land and cell phones. The data was weighted by party, age, race/ethnicity, education, region, gender and voter likelihood, a computed score that combines voter history, stated voter likelihood and modeled turnout by respondent. The Siena College Research Institute, directed by Donald Levy, Ph.D., conducts political, economic, social, and cultural research primarily in NYS. SCRI, an independent, non-partisan research institute, subscribes to the American Association of Public Opinion Research Code of Professional Ethics and Practices. For more information, call Steve Greenberg at (518) 469-9858. For survey crosstabs: www.Siena.edu/SCRI/SNY.

SCRI and the Emerson College Poll simultaneously fielded, and are releasing the pre-election questions in this survey. Each poll used their own methodologies for both fielding and data analysis. For questions about the Siena/Emerson polling project, call either Don Levy (518) 783-2901 or Spencer Kimball (617) 824-3491. Levy and Kimball will provide an analysis of the similarities and differences of their results on Monday, August 8, 2022.

Ryan Selection Offers No Help for Romney in New York