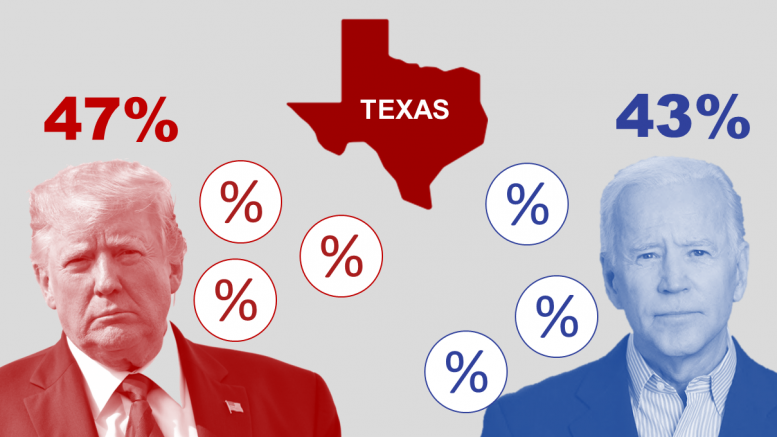 “Four years ago, Trump carried Texas – where no Democrat has won since Jimmy Carter in 1976 – by nine points, and today, he continues to hold a small but stubborn four-point lead,” said Don Levy, Director of the Siena College Research Institute. “In a state where Republicans outnumber Democrats by a small margin, each candidate is doing equally well with their own party, and independents are nearly evenly divided, it shouldn’t be a surprise that the race is close. Texas appears to be becoming a swing state.

“Trump maintains a better than two-to-one lead with white voters – and continues to lead strongly among whites with a college degree and overwhelmingly with whites without a degree,” Levy said. “Biden has the support of more than three-quarters of Black voters, and he has a 23-point lead, 57-34 percent, with Latinos, virtually unchanged from last month.”

“Among the 53 percent of voters who have already voted, Biden holds a 50-42 percent advantage, while among the remainder of likely voters, Trump leads 54-34 percent,” Levy said.

“In the Senate race, Cornyn has extended his lead to 10 points, up from six points last month but he still remains below 50 percent and well below the 62 percent of the vote he garnered in 2014,” Levy said. “Cornyn is a little stronger with Republicans than Hegar is with Democrats, and Cornyn leads with independents by eight points, up from four points last month.

“The incumbent and challenger both have comparable, positive favorability ratings, though Cornyn is more well known,” Levy said. “Hegar has a lot of ground to make up and not much time. Advantage Cornyn.”

This New York Times/Siena College survey of Texas was conducted October 20-24, 2020 by telephone calls in English and Spanish to 802 likely voters, with a margin of error of +/- 3.8 percentage points. Calls were made to a stratified weighted sample of voters from the L-2 Voter list via both land and cell phones. The data was weighted by party, age, race/ethnicity, education, region, gender and voter likelihood, a computed score that combines voter history, stated voter likelihood and modeled turnout by respondent. Polling support for this project provided by Institute for Policy and Opinion Research at Roanoke College, Reconnaissance Market Research, M. Davis and Co., and The Public Opinion Research Lab at the University of North Florida. The Siena College Research Institute, directed by Donald Levy, Ph.D., conducts political, economic, social, and cultural research. SCRI, an independent, non-partisan research institute, subscribes to the American Association of Public Opinion Research Code of Professional Ethics and Practices. For more information, please call Don Levy at 518-944-0482. Survey cross-tabulations and frequencies can be found at: www.Siena.edu/SCRI/SNY. For additional methodological information, click here.

NY’ers on Economy: It’s Bad and Getting Worse