Loudonville, NY. Across Upstate New York, CEO confidence held steady, dropping only a half point this year, demonstrating slightly less optimism than pessimism among leaders of private for-profit companies according to the twelfth annual Upstate New York Business Leader Survey from Siena College Research Institute sponsored by the Business Council of New York State, Inc. The Index of Business Leader Confidence, computed based on interviews with 427 business leaders of companies from Buffalo, the Capital Region, Rochester and Syracuse, stands at 96.6, down from 97.1 last year, below the breakeven point of 100 at which overall optimism and pessimism towards the current and future economic conditions are balanced. Current confidence was up two points from a year ago, but confidence in the future among Upstate business leaders fell by just over 3 points.

“Across Upstate, business leader confidence stayed virtually unchanged and remains just below the magic breakeven point this year. Confidence declined in Albany but remains strong and the highest of the four regions. Buffalo was up by almost 2 points but is still well below breakeven, Rochester rose by three points and Syracuse fell but sits right on the Upstate number. Despite holding steady overall, CEO’s future expectations are the lowest we’ve seen in six years,” said Siena College Research Institute Director Don Levy.

“Upstate CEO’s continue to have little confidence in state government’s efforts to enhance business conditions. CEO’s call for spending cuts and tax reform, and they feel as though the state is moving in the wrong direction on the regulatory environment, spending, ethics reform and workers compensation reform. About half, 48 percent, say the Paid Family Leave Law has negatively impacted them,” Levy said.

CEO’s have far more confidence in the efforts of the federal government to improve business conditions and over half give the federal government a grade of good or excellent on creating a business climate in which they can succeed. Over half, 52 percent, say that the recently passed federal tax reform legislation has had a positive impact on their business. Thirty-four percent say that new federal tariffs have had a negative impact on their business while 60 percent say the tariffs have had no impact.

Asked about 12 aspects of their organization’s culture, CEO’s list their strengths as operating as a team, responding to customer needs, supporting employee growth and always striving to improve. They say that their weakest areas are being innovative, responding to social and technological change and making sure that individual departments have short and long-term goals.

Fifty percent of CEO’s expect revenue growth in the coming year, while 37 percent expect growth in profits. More companies plan to hire rather than fire – 38 percent intend to increase their workforce compared to 8 percent that plan on decreases. And 57 percent of Upstate CEO’s, up from 56 percent a year ago, plan to invest in fixed assets in 2019.

“CEO’s continue to call on state government to cut spending, curtail regulation, reform workers compensation and enact ethics reform. But they say the state is moving in the wrong direction on each of those. Their view of the federal government is quite different. Today over half give the feds a thumbs up for creating a successful business climate when two years ago that number was a nearly invisible seven percent. Many applaud the new tax legislation and two-thirds say the health of our economy is on the right track,” Levy said.

A large majority of CEO’s say the country is headed on the right track when it comes to the health of our economy and the taxes businesses pay. However, more than half indicate that when it comes to the cost of health care and the federal budget deficit, the country is moving in the wrong direction. As for state issues, majorities of CEO’s think state spending, the regulatory environment, ethics reform, and workers compensation reform are all moving in the wrong direction. Only a quarter believe that infrastructure development is headed on the right track. 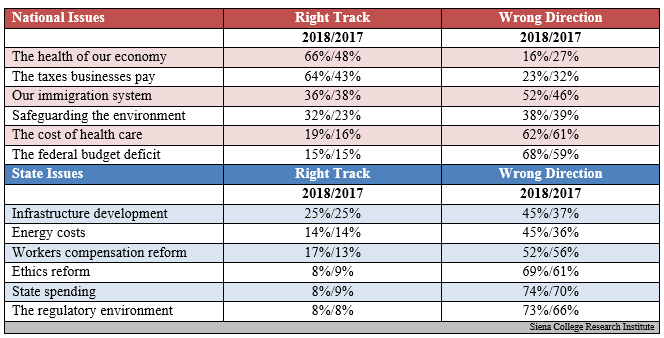 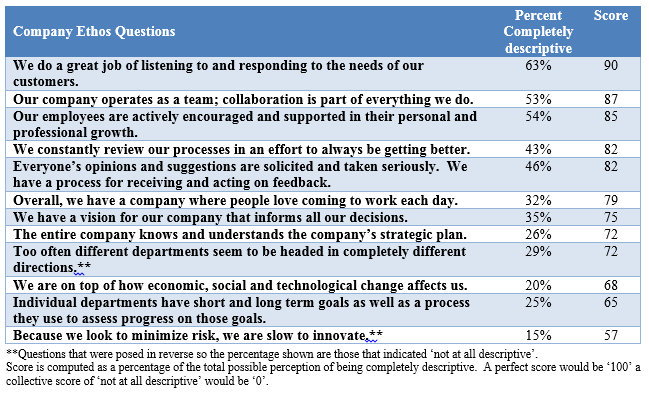 From The Business Council of New York State, Inc.

“We are seeing several significant recurring themes. While business leaders feel confident in how they are addressing factors within their control, and that they have benefited from some major federal policy initiatives, they still feel that a major burden is being imposed by New York State, with little expectation of relief,” said Heather C. Briccetti Esq., president and CEO of The Business Council of New York State, Inc. “As an example, nearly half of upstate CEOs say that the state’s paid family leave mandate has negatively impacted their business, adding to the challenges of operating in New York. They are expressing concerns about other labor law mandates and restrictions being considered in Albany. Moreover, their survey responses continue to reflect the reality of modest economic growth across upstate New York. Importantly, businesses are continuing to make capital investments in order to improve productivity, but most are projecting modest job growth, and moderate sales growth, for 2019. Not surprising, employers remain concerned about the availability to obtain skilled workers. To us, the message is clear – the state needs to both promote economic growth, and reduce self-imposed economic headwinds.” 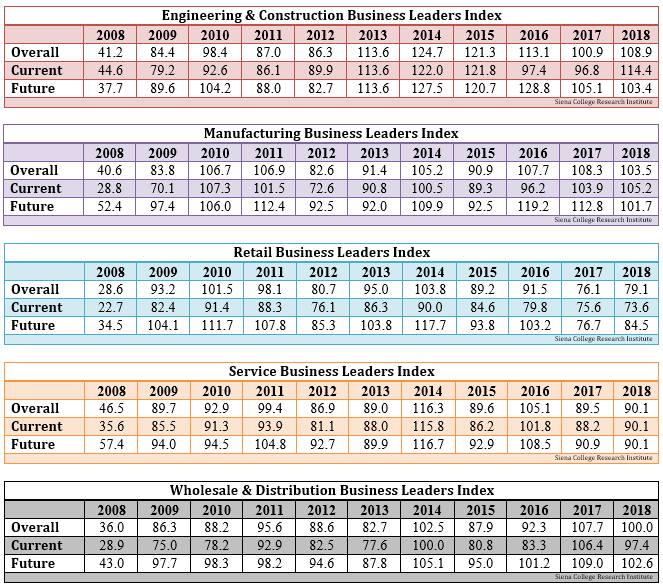 NYS Consumer Confidence down; Nation up