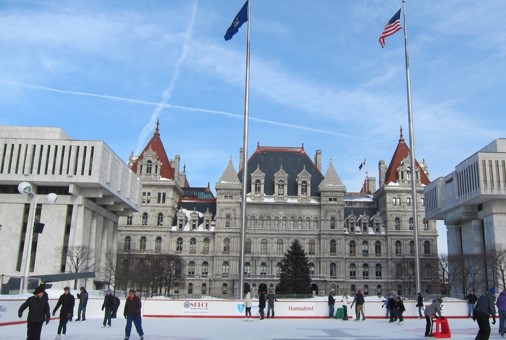 Voters say Democrats in Congress should not include President Trump’s border wall funding to avoid a second partial government shutdown 52-43 percent. The President should not declare a national emergency to fund the wall voters say 70-26 percent. Trump’s favorability rating is 35-59 percent, up from 32-64 percent last month.

“Now, for the first time ever, half of New Yorkers view Andrew Cuomo unfavorably. It’s his lowest favorability rating ever and his lowest-ever job performance as governor,” said Siena College pollster Steven Greenberg. “And it is a dramatic drop in both ratings from last month.

“Politically, Cuomo’s ratings drop is across the board, as he fell with Democrats, Republicans and independents. Geographically, his drop was much bigger downstate – New York City and the suburbs – than upstate, where his ratings were significantly lower previously,” Greenberg said. “The 43 percent of voters who view Cuomo favorably matches exactly the 43 percent of voters who view the State Assembly favorably, and the State Senate.” 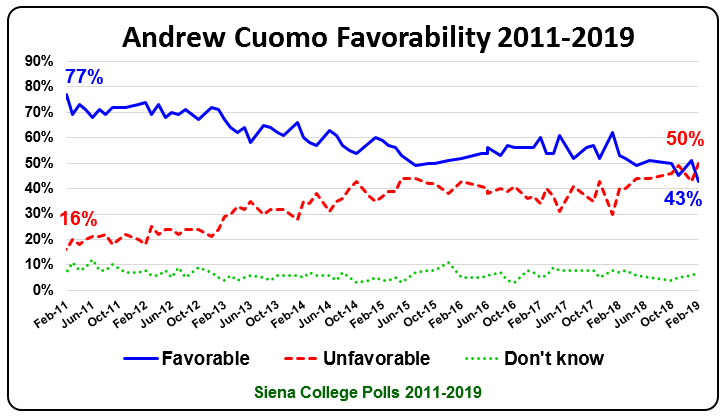 Plurality of Voters says Democratic Control of State Government Will Move State in Right Direction
“By a narrow 48-41 percent margin, voters say that the Democrats controlling the governorship and both houses of the Legislature will move New York on the right track over the next two years,” Greenberg said. “Not surprisingly, more than two-thirds of Democrats say their party will move the state on the right track, while more than three-quarters of Republicans say it will move the state in the wrong direction. Independents, by a ten-point margin, side with the Republicans.

“While black, Latino and New York City voters strongly say that Democratic control of Albany will move the state on the right track, pluralities of white, downstate suburban and upstate voters say Albany completely controlled by Democrats will move the state in the wrong direction,” Greenberg said.

More Voters Say Each of the Significant New Laws Passed in January Will Be Good – Not Bad – For NY
“Democrats, Republicans and independents overwhelmingly agree that the Child Victims Act will be good for New York,” Greenberg said. “On five other major policy actions Albany enacted last month, Democrats and independents think each will be good for New York. However, a majority or plurality of Republicans think they will be bad for New York.”

Congressional Dems Shouldn’t Give Trump Border Wall $; Trump Shouldn’t Declare National Emergency
“Nearly three-quarters of Democrats say their party in Congress should not give the President the border wall funding he’s called for to avoid another shutdown. More than three-quarters of Republicans think Democrats should provide the funding. Independents are closely divided but lean slightly toward the Republican position,” Greenberg said.

Schumer’s Role as Senate Minority Leader is Taking a Toll on How New Yorkers View Him
“Just before Schumer became U.S. Senate Minority Leader, he had a 67-23 percent favorability and was far and away the most popular New York pol. At that time, Republicans viewed him favorably 55-37 percent. Today, he has a breakeven favorability rating with all voters, and Republicans – New York Republicans – view him unfavorably 84-15 percent,” Greenberg said. “He remains popular with Democrats, 63-31 percent, and independents are evenly divided.

New York State Right Track Down, Now Breakeven; US Right Track Up, Still Significantly Under Water
“Last month, voters said New York was headed on the right track by a 49-40 percent margin. Now, 44 percent say the state is on the right track and 45 percent say it’s headed in the wrong direction. New York City voters and Democrats are upbeat about the state’s direction; other regions and parties are pessimistic,” Greenberg said.

This Siena College Poll was conducted February 4-7, 2019 by telephone calls conducted in English to 778 New York State registered voters. Respondent sampling was initiated by asking for the youngest male in the household. It has an overall margin of error of +/- 4.3 percentage points including the design effects resulting from weighting. Sampling was conducted via a stratified dual frame probability sample of landline and cell phone telephone numbers (both from ASDE Survey Sampler) from within New York State. Data was statistically adjusted by age, party by region, and gender to ensure representativeness. The Siena College Research Institute, directed by Donald Levy, Ph.D., conducts political, economic, social and cultural research primarily in NYS. SCRI, an independent, non-partisan research institute, subscribes to the American Association of Public Opinion Research Code of Professional Ethics and Practices. For more information, call Steve Greenberg at (518) 469-9858. For survey cross-tabs: www.Siena.edu/SCRI/SNY.