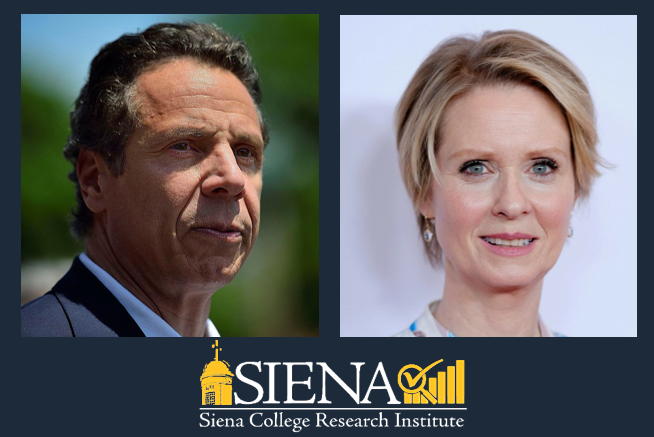 “Since the last Siena College poll, Nixon declared her candidacy, Senate Democrats promised kumbaya, there was public debate over the definition of ‘qualified lesbian,’ and Nixon appears to have secured the Working Families Party line for November,” said Siena College pollster Steven Greenberg. “The race has just started and there’s still five months to go. In a variation of Bette Davis’ famous line: fasten your seatbelts; it’s going to be a bumpy ride.

“Four years ago, Cuomo won the primary – in which only 11 percent of Democrats voted – with 63 percent of the vote, beating Zephyr Teachout by 29 points. Early in this primary race, Cuomo leads Nixon by 31 points,” Greenberg said. “He has a three-to-one lead in New York City, where more than half of Democratic primary votes traditionally come from, a two-to-one lead in the downstate suburbs and a narrower 48-37 percent lead upstate, which is slightly lower than his 15-point upstate margin of victory over Teachout four years ago.

“Cuomo leads Nixon by 25 points with men and 37 points with women. He leads by 23 points among white Democrats and more than double that with both black and Latino Democrats. Early on, Cuomo seems to be in a strong position to again be the Democratic Party’s standard bearer, however, Nixon has narrowed the deficit more than a little in the last month and the campaigns are just gearing up,” Greenberg said.

Molinaro and DeFrancisco each remain unknown to three-quarters of voters. More than half of registered Republicans say they don’t know who they would support in a primary between the two. Cuomo leads Molinaro 57-31 percent, little changed from 57-29 percent last month. He leads DeFrancisco 56-32 percent, down a little from 57-28 percent last month.

“In an April 2014 Siena College poll, Cuomo led Rob Astorino 58-28 percent – comparable to his leads over both of this year’s potential Republican opponents – before moving on to a narrower 54-40 percent win over Astorino. While minor party candidates garnered five percent of the vote four years ago, the likelihood of that growing significantly increased dramatically with the emergence of Nixon as the likely WFP nominee,” Greenberg said.

Child Victims Act & Codifying Roe v. Wade Overwhelmingly Supported
“The Child Victims Act has overwhelming bipartisan support. At least 65 percent of voters regardless of gender, race, religion, geography, ideology or income support its passage. Making New York’s law consistent with the 1973 Roe v. Wade decision also has broad support despite some partisan differences. Democrats favor it 78-11 percent, compared to 59-19 percent support among independents and 45-33 percent support among Republicans. It has strong support in every region, among women and men, with black, white and Latino voters, Catholics, Jews and Protestants, and voters of all income brackets.”

“Legalizing marijuana for recreational use is a mixed bag. Democrats support it by 24 points and independents by nine points. Republicans oppose it by 28 points. In New York City, it’s supported by a 16-point margin and by five points upstate. The downstate suburbs are evenly divided,” Greenberg said.

“In a hotly debated national issue, New Yorkers are closely divided on whether the 2020 Census should include a question on citizenship. Democrats say ‘no.’ Independents say ‘yes.’ Republicans overwhelmingly say ‘yes.’ It’s opposed in New York City and supported everywhere else. Whites support it while blacks overwhelmingly oppose it and Latinos are closely divided, leaning toward support,” Greenberg said.

Dems Say Senate Democratic Reunification Will Improve How State Govt. Operates; Reps & Inds Do Not
“While only about a quarter of New Yorkers have read or heard at least something about the recent announcement of Senate Democratic reunification, nearly half of voters – more than two-thirds of Democrats – believe it will improve the way state government operates. Republicans strongly say it will worsen state government operations and independents tilt more to the Republican side,” Greenberg said.

This Siena College Poll was conducted April 8-12, 2018 by telephone calls conducted in English to 692 New York State registered voters. Respondent sampling was initiated by asking for the youngest male in the household. It has an overall margin of error of +/- 4.3 percentage points including the design effects resulting from weighting. Sampling was conducted via a stratified dual frame probability sample of landline and cell phone telephone numbers (both from Survey Sampling International) from within New York State weighted to reflect known population patterns. Data was statistically adjusted by age, party by region, and gender to ensure representativeness. The Siena College Research Institute, directed by Donald Levy, Ph.D., conducts political, economic, social and cultural research primarily in NYS. SCRI, an independent, non-partisan research institute, subscribes to the American Association of Public Opinion Research Code of Professional Ethics and Practices. For more information, call Steve Greenberg at (518) 469-9858. For survey cross-tabs: www.Siena.edu/SCRI/SNY.