Loudonville, NY – The New York State Index of Consumer Sentiment in the first quarter of 2018 stands at 87.1 down 5.2 points from the last measurement in the fourth quarter of 2017, according to the latest poll by the Siena College Research Institute (SCRI). New York’s overall Index of Consumer Sentiment is 14.3 points below the nation’s* Index of 101.4. All three indexes for both the nation and New York are well above their breakeven points at which optimism and pessimism balance indicating strength in the consumer driven marketplace.

*National data compiled by the U. of Michigan   * ( ) shows points above/below breakeven point at which sentiment is balanced

“This quarter’s five-point drop in consumer sentiment was due to a weakening in New Yorkers’ confidence in our economic future. Overall confidence remains strong, but New Yorkers are far less secure today and optimistic about our state economy than Americans in general are towards their personal situation and the country’s future. Concerns about the future, perhaps due to recent market volatility and tariff talk is highest Upstate and among older New Yorkers,” according to Dr. Lonnstrom, professor of statistics and finance at Siena College and SCRI Founding Director.

In the first quarter of 2018, buying plans were up since the fourth quarter 2017 measurement for major home improvements, to 22.4% (from 20.8%). Buying plans held even for furniture, at 27.4%. Buying plans were down for consumer electronics at 38.2% (from 44.5%), homes, at 7.1% (from 7.6%), and cars/trucks, to 13.6% (from 15.2%).
“Despite some weakening in the overall index, with current sentiment buoyed by well over half of New Yorkers saying that this is a good time to buy major household items, we see plans for home improvements higher than at any point since 2007. Furniture buying as well as home buying look to remain robust. And, the bite New Yorkers feel from gas and food prices are at a decade low for food and within a couple of points for gas. While concerns over the future loom, we expect an active and strong spring,” Lonnstrom said. 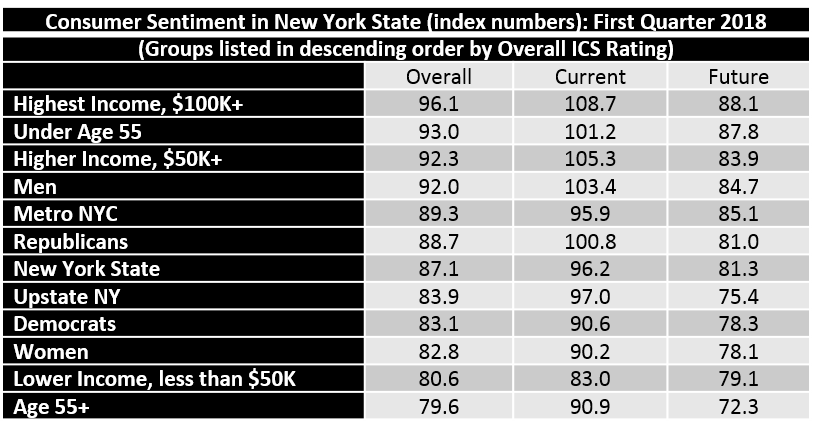 This Siena College Poll was conducted March 1-29, 2018 by telephone calls conducted in English to 802 New York State residents. Respondent sampling was initiated by asking for the youngest male in the household. It has an overall margin of error of +/- 4.4 percentage points including the design effects resulting from weighting when applied to buying plans and/or the perceived impacts of gas and food prices. As consumer sentiment is expressed as an index number developed after statistical calculations to a series of questions, “margin of error” does not apply to those indices. Sampling was conducted via a stratified dual frame probability sample provided by Survey Sampling International of landline and cell phone telephone numbers from within New York State weighted to reflect known population patterns. Data was statistically adjusted by age, region, gender and race/ethnicity to ensure representativeness. The Siena College Research Institute, directed by Donald Levy, Ph.D., conducts political, economic, social and cultural research primarily in NYS. SCRI, an independent, non-partisan research institute, subscribes to the American Association of Public Opinion Research Code of Professional Ethics and Practices. For more information or comments, please call Dr. Doug Lonnstrom at 518-783-2362. Survey cross-tabulations and buying plans can be found at www.siena.edu/scri/cci.

Cuomo Ratings All Up; Favorability Best in Three Years

Voters Don’t Think New Laws Will Reduce Corruption; Say Cuomo was Right to not Hold Up Budget for Bigger Changes