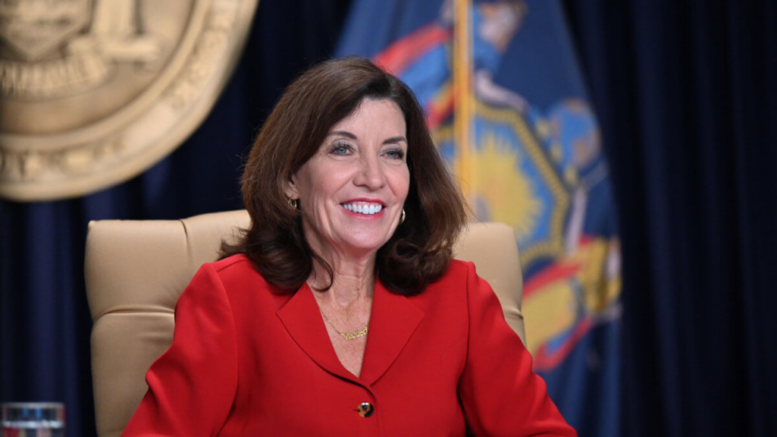 Loudonville, NY. As New Yorkers learn more about their new governor and Democrats look ahead to a June gubernatorial primary, Governor Kathy Hochul leads her closest opponent by between 14 and 19 points in three potential primary scenarios, according to a new Siena College poll of registered New York State voters.

Hochul has a 42-26 percent favorability rating, down from 42-17 percent last month. Her job performance rating is now negative 43-45 percent, down from 44-37 percent in September. Only between 27 and 42 percent of New Yorkers give Hochul positive grades on five different issues, while between 38 and 51 percent give her negative grades; she is close to break even on her handling of the pandemic and natural disasters but gets negative grades for cleaning up Albany corruption, strengthening the economy and ‘addressing issues important to you.’

“Predicting June’s Democratic gubernatorial ballot 36 weeks from primary day, four months before a state party convention with only Hochul declared is not for the faint hearted. That said, Siena presented Democrats with three potential primary matchups and in each case, Hochul leads by double digits. But let’s repeat, we are 36 weeks away with an unknown field, and most potential candidates being, like Hochul, largely unknown to a wide swath of voters,” said Siena College pollster Steven Greenberg.

“Then there’s the elephant – or perhaps the donkey – in the room. Will Cuomo run again, trying for electoral redemption? While one out of six Democrats say they would support Cuomo over Hochul, James, et. al., 57 percent of Democrats say Cuomo should have resigned, compared to 35 percent who said he should have stayed, and by two-to-one Democrats say Cuomo has sexually harassed multiple women,” Greenberg said.

Voters Divided on Hochul’s Overall Job Performance Rating and Some Specifics; Negative on Others

“Voters – particularly Republicans and independents – are not cutting the new governor much slack in judging her early performance. Independents are nearly two-to-one negative and Republicans rate her even more negatively than that,” Greenberg said. “On specific issues, Republicans and independents rate her negatively on all. Democrats give her positive grades for the pandemic, handling natural disasters and addressing issues important to them, and virtual breakeven grades on the economy and cleaning up corruption.”

“While it may not be surprising that Republicans, Democrats and independents don’t agree on the importance of addressing systemic racism or ensuring more New Yorkers get vaccinated, it should be noted that when it comes to the importance of reducing crime and reimbursing landlords for lost rent, there is virtually no difference of opinion among Democrats, Republicans and independents,” Greenberg said.

This Siena College Poll was conducted October 10-14, 2021 among 801 New York State registered voters with 501 voters contacted through a dual frame (landline and cell phone) mode and 300 responses drawn from a proprietary online panel (Lucid) of New Yorkers. Telephone calls were conducted in English and respondent sampling was initiated by asking for the youngest person in the household. Telephone sampling was conducted via a stratified dual frame probability sample of landline (ASDE) and cell phone (Dynata) telephone numbers within New York State weighted to reflect known population patterns. Data from both collection modes (phone and web) was merged and statistically adjusted by age, party by region, race/ethnicity, education, and gender to ensure representativeness. It has an overall margin of error of +/- 4.1 percentage points including the design effects resulting from weighting. There were 419 Democrats, with a margin of error of +/- 5.4 percentage points including the design effect resulting from weighting. The Siena College Research Institute, directed by Donald Levy, Ph.D., conducts political, economic, social, and cultural research primarily in NYS. SCRI, an independent, non-partisan research institute, subscribes to the American Association of Public Opinion Research Code of Professional Ethics and Practices. For more information, call Steve Greenberg at (518) 469-9858. For survey crosstabs: www.Siena.edu/SCRI/SNY.