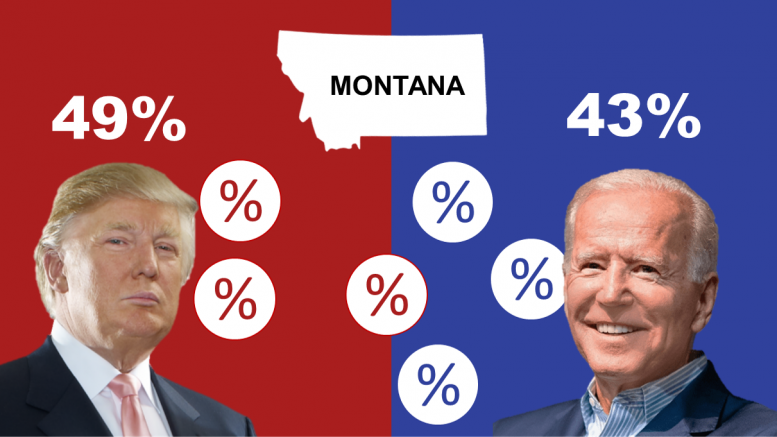 “Big Sky Country has been solidly red for a long time, having voted Democrat only once in the last 13 presidential elections. Trump won Montana by 20 points four years ago. Daines won his Senate race
by 18 points six years ago. So, the good news for Trump is that he continues to lead in Montana, the bad news is that he only leads by six points,” said Don Levy, Director of the Siena College Research Institute.

“Both candidates continue to have the support of more than 90 percent of the members of their party, and independents tilt toward Trump by six points, in a state where Republicans outnumber Democrats, and independents outnumber Republicans,” Levy said. “The gender gap expanded a little since last month, and now Trump leads with men by 20 points and Biden leads with women by eight points.”

“Biden increased his lead among white voters with a college degree, now leading 59-34 percent, up from 52-40 percent, while Trump increased his lead with whites without a degree to 59-34 percent, up from
52-41 percent,” Levy said. “Whites with and without a degree were mirror images of each other previously. They remain mirror images with each group even more committed to its favored candidate.”

“Amazingly, with two weeks until election day, 58 percent of Montanans have already voted, including 70 percent of Democrats, 58 percent of independents and 47 percent of Republicans,” Levy said. “Among those who have voted, Biden leads 52-41 percent. Likely voters yet to vote favor Trump 62-29 percent.”

“It does not appear that Daines will coast to an easy victory, as he did six years ago,” Levy said. “Bullock has the support of 96 percent of Democrats, a little better than Daines’ 87 percent support from Republicans,” Levy said. “Daines had been trailing with independents by four points previously, and now holds a six-point lead with the largest ‘partisan’ bloc of Montana voters.

“Both the incumbent Senator and incumbent Governor have comparable favorability ratings with Bullock on the positive side by nine points and Daines by six points,” Levy said. “The race for Senate looks like the more interesting race to watch coming out of Montana on election night.”

This New York Times/Siena College survey of Montana was conducted October 18-20, 2020 by telephone calls in English to 758 likely voters, with a margin of error of +/- 4.4 percentage points. Calls were made to a stratified weighted sample of voters from the L-2 Voter list via both land and cell phones. The data was weighted by party, age, race/ethnicity, education, region, gender and voter likelihood, a computed score that combines voter history, stated voter likelihood and modeled turnout by respondent. Polling support for this project provided by Reconnaissance Market Research. The Siena College Research Institute, directed by Donald Levy, Ph.D., conducts political, economic, social, and cultural research. SCRI, an independent, non-partisan research institute, subscribes to the American Association of Public Opinion Research Code of Professional Ethics and Practices. For more information, please call Don Levy at 518-944-0482. Survey cross-tabulations and frequencies can be found at: www.Siena.edu/SCRI/SNY. For additional methodological information, click here.