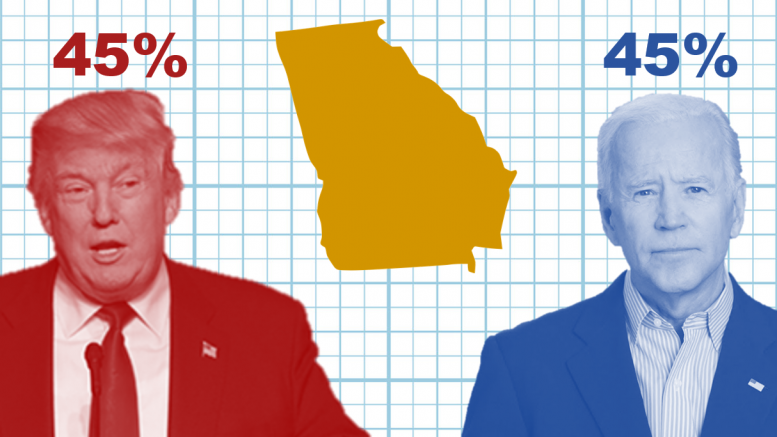 Loudonville, NY. In Georgia, two weeks before election day, the race for president remains tied. President Donald Trump and former Vice President Joe Biden both have the support of 45 percent of Georgia voters, exactly the same as it was in a September 24th poll. The race for the full U.S. Senate term is also neck and neck as Republican incumbent David Perdue and Democrat Jon Ossoff are tied at 43 percent apiece, after Perdue had a narrow three-point lead last month, according to The New York Times/Siena College polls of likely Georgia voters released today.

“Georgians seem locked in and equally divided when it comes to their choice for president. With all that has occurred in the last month – debates, the President in the hospital, the pandemic and the economy – this race hasn’t moved a single point,” said Don Levy, Director of the Siena College Research Institute. “Democrats remain committed to Biden, Republicans remain committed to Trump and independents are tilting a little in Biden’s direction.”

“Biden is cleaning up in Georgia’s cities, leading 70-21 percent. He holds his own in the suburbs, leading 50-40 percent. Trump runs strong in the rural areas of the state, ahead 60-29 percent,” Levy said.

“The gender gap remains as men support Trump by 12 points and women back Biden by 10 points,” Levy said. “Biden has the support of 81 percent of Black voters, while Trump has the support of 65 percent of white voters. Among whites without a college degree, they back Trump 76-18 percent, and whites with a college degree also back Trump but by a much narrower 52-40 percent margin.

“Nearly one-third of Georgians have already voted, including 42 percent of all Democrats, 29 percent of independents and 26 percent of Republicans,” Levy said. “Among those who have voted already, Biden has a 57-36 percent lead. Likely voters who have yet to vote support Trump 50-40 percent.”

“Just as the race at the top of the ticket is a barn burner, so too is the race for the full six-year U.S. Senate seat currently held by freshman Perdue. With five percent supporting a minor party candidate and eight percent still undecided, this tied race can clearly go in either direction,” Levy said. “Perdue won six years ago by eight points, a standard it does not appear that either candidate can match this year.

“The same party, gender and racial characteristics seen in the presidential race are nearly identical in this race,” Levy said. “Both candidates have comparable favorability ratings, and each is viewed favorably by 44 percent of Georgians.”

This New York Times/Siena College survey of Georgia was conducted October 13-19, 2020 by telephone calls in English to 759 likely voters, with a margin of error of +/- 4.1 percentage points. Calls were made to a stratified weighted sample of voters from the L-2 Voter list via both land and cell phones. The data was weighted by party, age, race/ethnicity, education, region, gender and voter likelihood, a computed score that combines voter history, stated voter likelihood and modeled turnout by respondent. Polling support for this project provided by Institute for Policy and Opinion Research at Roanoke College, M. Davis and Co., Reconnaissance Market Research, and The Public Opinion Research Lab at the University of North Florida. The Siena College Research Institute, directed by Donald Levy, Ph.D., conducts political, economic, social, and cultural research. SCRI, an independent, non-partisan research institute, subscribes to the American Association of Public Opinion Research Code of Professional Ethics and Practices. For more information, please call Don Levy at 518-944-0482. Survey cross-tabulations and frequencies can be found at: www.Siena.edu/SCRI/SNY. For additional methodological information, click here.