Press Release     Crosstabs
Loudonville, NY. Representative Alexandria Ocasio-Cortez has a positive 52-33 percent favorability rating among voters of her district nearly three months into her first term in Congress, and 48 percent of all voters and 61 percent of Democrats would vote to re-elect Ocasio-Cortez in 2020 while 39 percent would prefer someone else, according to a new Siena College poll of New York CD 14 registered voters released today. Fifty-seven percent of CD 14 voters think it was bad for New York that Amazon cancelled its plans to build a new headquarters in Queens while 32 percent say it was good for New York, and by 58-35 percent, voters in CD 14, which includes sections of both Queens and the Bronx, support Governor Cuomo’s efforts to woo Amazon to reconsider its decision.

When it comes to politics, only 25 percent of voters in Ocasio-Cortez’s district would describe themselves as a Democratic Socialist while 70 percent prefer describing themselves in ‘some other way.’ Still, overwhelming majorities are in favor of Medicare for all, free tuition at public universities across the country, a federal guarantee of a job that pays a living wage, banning assault weapons and taxing incomes above $10 million at rates of 60 percent or more. The Green New Deal garners the support of 41 percent of Ocasio-Cortez’s constituents with 20 opposed and 38 percent indicating that they don’t know enough about it.

“AOC’s favorability is a plus 19 in a district where two-thirds of votes are Democrats,” said Siena College Research Institute Director Don Levy. “Among Democrats her favorability soars to 65 percent and moves even higher to 79 percent among self-described liberals. Although it is very early, with nearly half of all voters and 61 percent of Democrats saying that they would vote to re-elect Ocasio-Cortez in 2020, she may be in position to represent this district for at least another term.”

“Led by the Democratic majority in the district, voters strongly support much of the legislation that Ocasio-Cortez is advocating,” Levy said. “About three-quarters of all voters and over 80 percent of Democrats are in favor of free tuition at public colleges across the country, banning assault weapons, a federal guarantee of a job that pays a living wage and Medicare for all. By two-to-one they support ‘The Green New Deal’ with Democrats at five-to-one although almost 40 percent do not have enough information about it in order to say. A majority oppose repealing and replacing Obamacare and a small majority would support impeaching the President.”

“AOC has jumped onto the front pages and certainly has attained household name status in her district,” Levy said. “Nearly two-thirds say that they are following the coverage of their freshman representative closely and while only one in seven have no opinion about her, favorable or unfavorable, Joe Crowley after 10 terms remains unknown to nearly 40 percent of voters.

“Fifty-nine percent of voters say that they are proud to have Ocasio-Cortez representing the district and 61 percent agree that while many of her ideas on the economy, climate or healthcare may not become law soon, they think she is moving us towards a more fair and just society,” Levy said.

“But some have their doubts. Forty percent agree while 51 percent disagree that Ocasio-Cortez is simply too inexperienced to be their representative, and voters are nearly evenly divided as to whether her ideas are too radical, too far to the left with 43 percent saying that she is too radical and 47 percent saying that she is not,” Levy said. “And while Ocasio-Cortez has described herself as a Democratic Socialist, only a quarter of her district, a third of Democrats and 44 percent of liberals are willing to do the same.”

CD 14 Voters on NY Issues
“The district breaks with Ocasio-Cortez on the Amazon deal. Fifty-seven percent say that Amazon canceling was bad for New York and 58 percent would like the deal revived. Even in the Queens area of the district, over half say losing the deal was bad and 54 percent would like it revived,” Levy said. 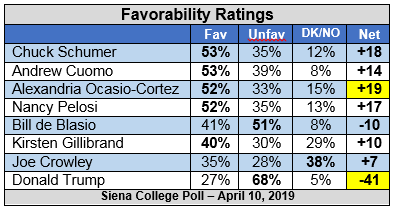 In CD 14 among eight high profile politicians, Ocasio-Cortez has the highest net favorability rating at plus 19 followed closely by Senator Chuck Schumer at 18 and House Speaker Nancy Pelosi at plus 17. Former CD 14 Representative Joe Crowley at 35-28-38 has a plus 7 rating and President Donald Trump has a negative 41 favorability rating in this heavily Democratic district.

# # #
This Siena College Poll of NY 14 was conducted March 31- April 4, 2019 by telephone calls conducted in English and Spanish to 607 New York CD 14 registered voters. Respondent sampling was initiated by asking for the youngest male in the household. It has an overall margin of error of +/- 4.3 percentage points including the design effects resulting from weighting. Sampling was conducted via a stratified dual frame probability sample of landline and cell phone telephone numbers (both L-2 Voter file) from within New York CD 14. Data was statistically adjusted by age, party by county, race/ethnicity by county, and gender to ensure representativeness. The Siena College Research Institute, directed by Donald Levy, Ph.D., conducts political, economic, social and cultural research primarily in NYS. SCRI, an independent, non-partisan research institute, subscribes to the American Association of Public Opinion Research Code of Professional Ethics and Practices. For more information, call Don Levy at (518) 783-2901 or (518) 944-0482. For survey cross-tabs: www.Siena.edu/SCRI/SNY.

Confidence Hovers at Breakeven Point; Nation Up 2 Points, NY Down 1.5

By 2-to-1, Voters Say Moving Too Quickly to Loosen Stay-at- Home Orders is Bigger Danger than Moving Too Slowly