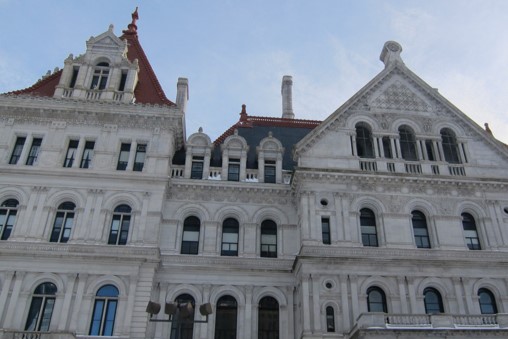 Loudonville, NY. Only 31 percent of New Yorkers think race relations in the state are excellent (four percent) or good (27 percent), compared to 66 percent who say they are fair (38 percent) or poor (28 percent), down significantly from 47-51 percent on Martin Luther King Day in 2014, and 54-46 percent in 2013, according to a new Siena College poll of New York State registered voters released today.

By an 81-16 percent margin – including 72-25 percent in New York City – voters have a favorable view of their local police department. A majority of New Yorkers, 52 percent, including nearly two-thirds in the City, say police officers who turned their back on Mayor Bill de Blasio were wrong, compared to 39 percent who say they were right (28 percent in the City). More voters say Governor Andrew Cuomo and NYPD Commissioner Bill Bratton are making police-community relations better than those who say the two are making relations worse. However, more say that PBA President Pat Lynch is making relations worse rather than better and by large margins, more say Al Sharpton and de Blasio are making police-community relations worse.

“Even as we celebrate the life and achievements of Dr. King, New Yorkers’ feelings about the state of race relations here are more negative today than they have been for the last several years,” said Siena College pollster Steven Greenberg. “Last year, two thirds of black voters and about half of white and Latino voters thought race relations were only fair or poor. Today, between 65 and 74 percent of black, white and Latino voters say race relations are fair or poor, as do between 64 and 68 percent of Democrats, Republicans and independents.

“Clearly, events over the last several months, particularly Ferguson and Staten Island, have had a significant impact on how many New Yorkers feel about race relations,” Greenberg said. “A majority of New Yorkers, including a large majority of those from the City, believe the Staten Island grand jury should have indicted the police officer in the death of Eric Garner, although that belief is down a little from last month.”

Voters Really Like Their Local Police Department; Think Turning Backs Toward de Blasio is Wrong
“New Yorkers overwhelmingly view their local police department favorably. Nearly nine in ten outside New York City view their local department favorably, and City voters view the NYPD favorably by a nearly three-to-one margin,” Greenberg said. “A majority of upstaters and Republicans think cops were right to turn their backs on the Mayor and white voters were evenly divided. However, a majority of downstate suburbanites, nearly two-thirds of Democrats and City voters and more than three-quarters of people of color said they were wrong.

Sharpton, de Blasio and Lynch Making Police-Community Relations Worse; Bratton & Cuomo Better
“While Bratton works for de Blasio, voters see them in very different lights regarding their actions to improve police-community relations. Among New York City and New York State voters, pluralities think that Bratton is making relations better while de Blasio is making them worse,” Greenberg said. “There’s little good news here for de Blasio, even as City voters say that the PBA’s Lynch is doing a little bit worse and that Sharpton is doing even worse than that. Nearly half of State and City voters say Cuomo has had little impact, however, far more voters think he’s made relations better than those who think he’s made them worse.”

37th SD, Open Westchester Seat, is Neck-and-Neck As Democrat Latimer Is Up By 3 Points Over Cohen