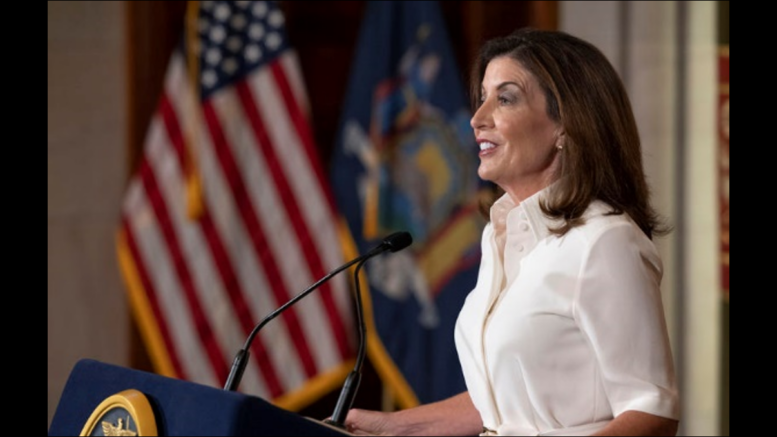 Loudonville, NY. Weeks after becoming New York’s 57th Governor, Kathy Hochul is viewed favorably by
42 percent of voters and unfavorably by 17 percent, with 41 percent who either don’t know Hochul or don’t know enough about her to have an opinion, according to a new Siena College poll of registered New York State voters.

By 52-18 percent, voters say Hochul has a more collaborative approach to government leadership than her predecessor, and they say it’s exciting to have New York’s first woman governor, 74-16 percent. Strong majorities of voters think Hochul will be successful in ensuring a safe transition to in-person public education, leading the state through natural disasters and controlling the spread of COVID.

Andrew Cuomo should have resigned, rather than remain in office, voters say 67-26 percent, including Democrats, 55-35 percent. Cuomo has his worst-ever favorability rating, 34-55 percent, down from 45-47 percent in June. Looking back over the last decade, voters give Cuomo a 50-48 percent job performance rating, and a plurality, 39 percent, say he left New York a better place to live and work, compared to 27 percent who say he left it worse.

“While still largely unknown to a wide swath of New Yorkers, Governor Hochul begins her tenure with a lot of good will from voters. Among those with an opinion about her, she is viewed strongly favorably, although two in five New Yorkers don’t yet have an opinion, despite Hochul having been Lt. Governor for six years and elected statewide twice. Among all voters, Hochul has a 44-37 percent job performance rating after only a few weeks in office,” said Siena College pollster Steven Greenberg.

“Voters overwhelmingly say it’s exciting to have New York’s first woman governor, including 84 percent of Democrats, 68 percent of independents and 59 percent of Republicans,” Greenberg said. “A strong 52-18 percent majority, including majorities of all parties, say she will be more collaborative than Cuomo. Voters reject the notion, 48-28 percent, that Hochul doesn’t have enough experience to lead New York.”

“It may be too early to call it a honeymoon, however, voters across the partisan spectrum say that they think Hochul will be successful in ensuring in-person public school education (69-16 percent), leading the state through natural disasters (65-16 percent) and controlling the spread of COVID (61-24 percent). While most think she will be successful in revitalizing the state’s economy and balancing tenant/landlord rights, a plurality of Republicans think she will be unsuccessful in each of those efforts,” Greenberg said.

Voters: Cuomo Right to Resign; Worst-ever Favorability Rating; 50-48% Job Performance Rating as Gov
“Cuomo gets his worst-ever favorability rating from voters, 34-55 percent, with Democrats only giving him a 47-39 percent favorability rating. Voters overwhelmingly said Cuomo should have resigned rather than remain in office, 67-26 percent, including Democrats, 55-35 percent,” Greenberg said. “More than three-quarters of Republicans, independents and voters from outside New York City say Cuomo was right to resign rather than remain, as do a plurality of New York City voters.

“On the good news front for Cuomo, he gets a 50-48 percent job approval rating for his tenure as governor, including a 65-32 percent rating from Democrats,” Greenberg said. “Did Cuomo make New York a better place to live and work? A majority of Democrats and 39 percent of all voters, a plurality, say ‘yes,’ compared to 27 percent who say he made the state worse, including a majority of Republicans and a plurality of independents. An additional 27 percent say he made the state neither better nor worse.”

“Three different vaccine mandates – employees generally, school employees specifically and customers of certain businesses – each has the support of at least 65 percent of voters. Each has support from more than three-quarters of Democrats and a majority of independents. Although a majority of Republicans support two of the mandates, they are divided on employers mandating their employees,” Greenberg said. “Mask mandates have even greater support among New Yorkers. A mask mandate for schools is supported by 89 percent of Democrats, 76 percent of independents and 57 percent of Republicans.

“While 40 percent of voters think the worst of the pandemic is over, 44 percent say the worst is still to come, a major change from May, when by a 69-19 percent margin, voters thought the worst was over,” Greenberg said.

This Siena College Poll was conducted September 7-12, 2021 among 700 New York State registered voters with 318 voters contacted through a dual frame (landline and cell phone) mode and 382 responses drawn from a proprietary online panel (Lucid) of New Yorkers. Telephone calls were conducted in English and respondent sampling was initiated by asking for the youngest person in the household. Telephone sampling was conducted via a stratified dual frame probability sample of landline (ASDE) and cell phone (Dynata) telephone numbers within New York State weighted to reflect known population patterns. Data from both collection modes (phone and web) was merged and statistically adjusted by age, party by region, race/ethnicity, education and gender to ensure representativeness. It has an overall margin of error of +/- 4.2 percentage points including the design effects resulting from weighting. The Siena College Research Institute, directed by Donald Levy, Ph.D., conducts political, economic, social, and cultural research primarily in NYS. SCRI, an independent, non-partisan research institute, subscribes to the American Association of Public Opinion Research Code of Professional Ethics and Practices. For more information, call Steve Greenberg at (518) 469-9858. For survey crosstabs: www.Siena.edu/SCRI/SNY.

Half of NYers Optimistic, Half Pessimistic About Future of Country Under President Trump; Huge Partisan Divide

Voters Give Cuomo & Schumer Their Lowest Ratings Ever