Loudonville, NY. With a little more than six weeks until primary day, Governor Andrew Cuomo holds a two-to-one, 60-29 percent lead over Cynthia Nixon in the battle for the Democratic nomination for Governor, according to a new Siena College poll of likely Democratic primary voters. Cuomo has a 67-29 percent favorability rating, compared to Nixon’s 43-30 percent favorability rating.

In the race for the Democratic nomination for Attorney General, New York City Public Advocate Letitia James has the support of 25 percent of likely voters, compared to 16 percent for Representative Sean Patrick Maloney, 13 percent for Zephyr Teachout and four percent for Leecia Eve, with 42 percent of likely Democrats saying they are undecided. Lieutenant Governor Kathy Hochul leads New York City Councilman Jumaane Williams 30-21 percent, with half of Democrats undecided in the primary race for Lieutenant Governor. 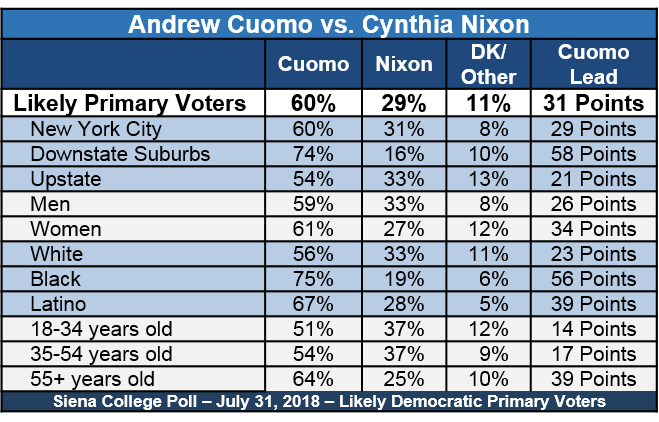 “Andrew Cuomo, viewed favorably by two-thirds of Democratic voters, has a commanding 31-point lead over Cynthia Nixon, who’s viewed favorably by a plurality of Democrats, with one-quarter not knowing enough about her to have an opinion,” said Siena College pollster Steven Greenberg. “Cuomo leads by 21 points upstate, 29 points in New York City and 58 points in the downstate suburbs, where he leads 74-16 percent.

“Democrats under 35 years-old back Cuomo by a comfortable, low double-digit 14 points, and Democrats 35-54 years-old favor him by 17 points. However, voters 55 and older, likely to make up the majority of the electorate, support Cuomo 64-25 percent, or by 39 points,” Greenberg said.

“Liberal Democrats are strongly with Cuomo, while moderates are overwhelmingly with Cuomo. Nixon trails among men by 26 points and an even larger 34 points with women. Cuomo has the support of three-quarters of black Democrats and two-thirds of Latinos,” Greenberg said.

“More than 80 percent of Democrats supporting Cuomo say they are voting for him more than voting against Nixon, however, 60 percent of Nixon voters say their vote is more against Cuomo than it is for her,” Greenberg said. “Nixon has the anti-Cuomo Democrats but she’ll need to expand on that to make this race competitive.

“Not surprisingly, Nixon voters say she’d be better on all the issues, although about a quarter of her supporters say Cuomo would be better on infrastructure. Similarly, Cuomo does better on all the issues with his voters, although he loses about a quarter of his supporters to Nixon on corruption and progressive policies,” Greenberg said. “Both younger voters and liberals – despite favoring Cuomo in the horse race – say Nixon is better on three of the five issues: corruption, progressive policies and public education.”

“The four-way race for the Democratic nomination for Attorney General has a frontrunner in James but Maloney and Teachout are certainly within shouting distance and Eve is running far behind. The plurality of Democrats, however, are undecided,” Greenberg said. “It’s not surprising that the race is wide open since none of the candidates are particularly well known to voters.

“Over the next six weeks, all of these candidates have a lot of work to do to become known to Democratic primary voters and then get them to the polls in what is likely to be – sadly – a low turnout election,” Greenberg said. “Although James has the early lead, there’s a long way to go in this race before we know which Democrat will take on Republican Keith Wofford to succeed Barbara Underwood in an election with no incumbent.”

“Both candidates are essentially unknown to between two-thirds and three-quarters of likely Democratic primary voters. Half of those voters couldn’t tell you who they’ll support for the second spot on the top of the ticket,” Greenberg said. “With a lead of only 30-21 percent, Hochul is far from a shoe-in to win renomination as Lieutenant Governor.

“Although Williams has a nine-point edge in New York City, which is likely to produce about half of all voters, he trails Hochul by seven points in the downstate suburbs, and upstate Hochul has a commanding 48-11 percent lead,” Greenberg said. “Black voters favor Williams by 33 points. Latino voters are evenly divided. And white voters favor Hochul by 22 points, as do liberals by 10 points.”

Democrats Optimistic About Direction of the State
“By a two-to-one, 55-28 percent, margin, Democrats likely to vote in the September primary say the state is on the right track. Interestingly, there is virtually no difference between New York City Democrats – 54-30 percent – and upstate Democrats – 53-31 percent. Suburban Democrats are far more optimistic, saying the state is on the right track by a 66-16 percent margin, which may explain that it’s the region giving Cuomo his largest lead over Nixon.”

This Siena College Poll was conducted July 22-26, 2018 by telephone calls conducted in English to 630 likely New York State Democratic primary voters. It has an overall margin of error of +/- 3.9 percentage points including the design effects resulting from weighting. Sampling was conducted via a stratified dual frame sample of landline and cell phone telephone numbers from the L-2 Voter list. A likely-to-vote probability was computed for each respondent based on both their stated likelihood to vote as well as by virtue of the imputation of a turnout probability score based on past voting behavior. This probability to vote was applied as a weight along with a weight that considered historic by region turnout, age and gender. The Siena College Research Institute, directed by Donald Levy, Ph.D., conducts political, economic, social and cultural research primarily in NYS. SCRI, an independent, non-partisan research institute, subscribes to the American Association of Public Opinion Research Code of Professional Ethics and Practices. For more information, call Steve Greenberg at (518) 469-9858. For survey cross-tabs: www.Siena.edu/SCRI/SNY.

NYers Think Spitzer Knew What His Aides Were Up To