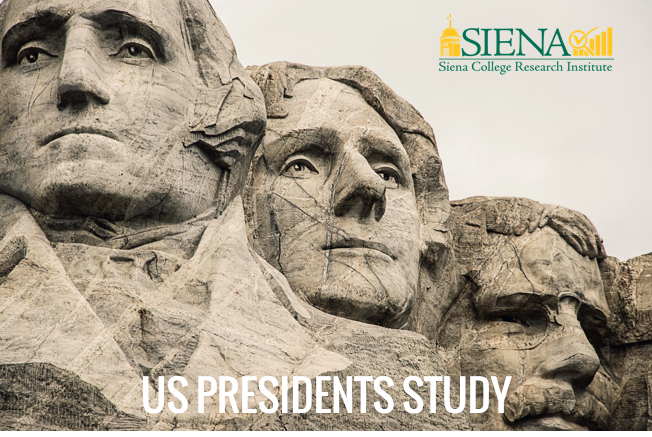 Loudonville, NY. This Presidents’ Day, as we honor all United States Presidents past and present, the Siena College Research Institute is beginning their sixth U.S. Presidents Survey, which is administered during the second year of the first term of a new president. Its commencement in 1982 sparked a new tradition. The study calls upon historians, political scientists and presidential scholars to rate the presidents in twenty areas such as background, imagination, integrity.

In a recent Siena College poll of New York State registered voters, Barack Obama was named as New York’s favorite of the six living current and former Presidents, with a favorability rating of 67-29 percent. In the 2010 expert survey, Obama’s first time in the poll, he came in 15th overall. President Donald Trump, had the lowest favorability rating of any living President with NY voters at a negative 33-62 percent. This year is the first in which experts will have the chance to rank Trump.

This year SCRI is also launching a new webpage on their website based on the survey’s results. Study participants, or anyone who is interested, can view results from this year’s survey and previous survey results. In addition to survey results, the page will be updated throughout the data collection period with a variety of content related to U.S. Presidents including interviews with experts, editorials, quizzes and trivia.