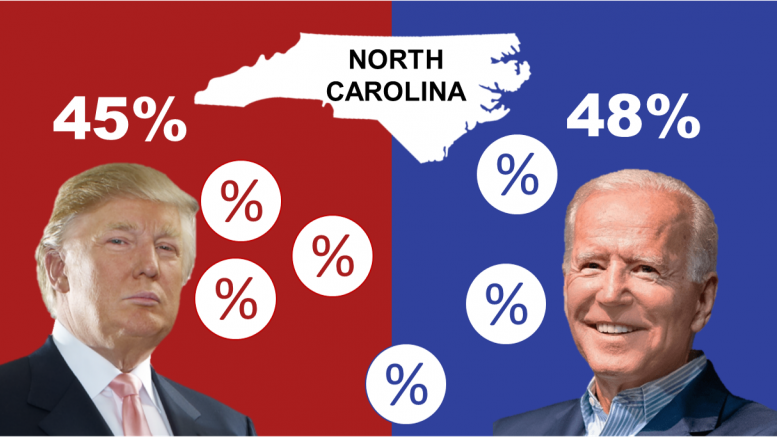 “As the campaign enters the closing days – with fewer and fewer voters who have yet to cast their ballot – the race for North Carolina’s 15 Electoral College votes continues to be nip and tuck. Biden has maintained a narrow advantage throughout the fall and has the early lead among those who have already voted,” said Don Levy, Director of the Siena College Research Institute. “Among the two-thirds who have already voted, Biden leads 54-40 percent. Trump leads 55-37 percent among the one-third who have not yet voted.

“There remains a narrow gender gap with Biden leading among women 51-44 percent and Trump having a slight 47-45 percent edge with men,” Levy said.

“Both candidates hold at least 93 percent of the voters from their party, and Biden has opened a 15-point lead among independents,” Levy said. “Black voters are with Biden 88-5 percent, and white voters favor Trump 57-38 percent. Trump has a two-to-one lead among white voters without a college degree, while Biden has a narrow four-point edge with college-educated whites.”

“Cunningham continues to maintain a small lead over Tillis, even as the number of undecided voters drops, as both candidates solidify support with voters from their party,” Levy said. “Independent voters – like at the top of the ticket – have shifted a little to the Democratic side, and Cunningham now leads with them 48-34 percent. While independents have an evenly divided view on Cunningham’s favorability, they give Tillis a favorability rating that’s 22 points under water.

“With just six days to round up those voters who have not yet voted, both campaigns have their work cut out for them in the Tar Heel State, where, given how close the race is, every vote really counts,” Levy said.

This New York Times/Siena College survey of North Carolina was conducted October 23-27, 2020 by telephone calls in English to
1,034 likely voters, with a margin of error of +/- 3.7 percentage points. Calls were made to a stratified weighted sample of voters from the L-2 Voter list via both land and cell phones. The data was weighted by party, age, race/ethnicity, education, region, gender and voter likelihood, a computed score that combines voter history, stated voter likelihood and modeled turnout by respondent. Polling support for this project provided by Reconnaissance Market Research and The Public Opinion Research Lab at the University of North Florida. The Siena College Research Institute, directed by Donald Levy, Ph.D., conducts political, economic, social, and cultural research. SCRI, an independent, non-partisan research institute, subscribes to the American Association of Public Opinion Research Code of Professional Ethics and Practices. For more information, please call Don Levy at 518-944-0482. Survey cross-tabulations and frequencies can be found at: www.Siena.edu/SCRI/SNY. For additional methodological information, click here.

NYS Consumer Sentiment Up Over 4 Points