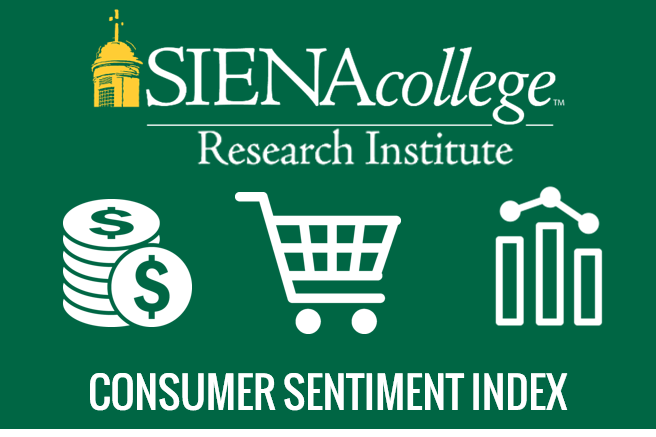 Loudonville, NY – The New York State Index of Consumer Sentiment in November stands at 84.0 up 5.2 points from the last measurement in June 2014, according to the latest poll by the Siena (College) Research Institute (SRI). New York’s overall Index of Consumer Sentiment is 4.8 points below the nation’s* Index of 88.8. All three indexes for both the nation and New York are well above their breakeven points at which optimism and pessimism balance.

“It may not feel like ‘happy days are here again’ to many and holiday spending in New York is not poised to set any records, but overall consumer sentiment is up dramatically reaching a number we haven’t seen since early 2007. New Yorkers trail the nation in the present tense but lead when looking to the future driven by stronger downstate optimism,” Dr. Lonnstrom said.
In November, buying plans were up since the June 2014 measurement for cars/trucks, at 13.6% (from 11.8%), consumer electronics, to 44.6% (from 34.1%), furniture, at 23.8% (from 19.7%), and homes, at 6.8% (from 4.3%). Buying plans were down for major home improvements, 15.7% (from 20.9%).
“Buying plans are up in every category from the summer except home improvements. Consumer electronics jumped ten points no doubt due to holiday plans but more significant is home buying approaching seven percent which should signal some rippling across all consumer goods,” Dr. Lonnstrom said.

“We haven’t seen gas prices this low since the fall of 2010 and consumers are celebrating falling prices with a collective sigh of relief. Unfortunately, after enjoying prices around $2.70 four years ago, New Yorkers saw prices rise quickly to over $4.00 and concern skyrocketed from 40 percent to 72 percent. For now, cheaper gas is a welcome gift at this time of year. But on a note of Scrooge, food prices remain a concern to nearly seven out of ten of all New Yorkers and over eighty percent of low income residents,” Dr. Lonnstrom said.

The SRI Index of Consumer Sentiment was conducted in November 2014 by random telephone calls via both landlines and cellphones to 809 New York State residents over the age of 18. As consumer sentiment is expressed as an index number developed after statistical calculations to a series of questions, “margin of error” does not apply. Buying plans, which are shown as a percentage based on answers to specific questions, do have a margin of error of +/- 3.4 points. For more information or comments, please call Dr. Doug Lonnstrom, SRI’s Founding Director, at 518-783-2362. Survey cross-tabulations and buying plans can be found at www.siena.edu/sri/cci. SRI is an independent, non-partisan research institute. SRI subscribes to the American Association of Public Opinion Research (AAPOR) Code of Professional Ethics and Practices.

In Aftermath of Mueller Report, New Yorkers Are Divided